...Aili?
Yup, that's right! This morning I jumped out of a plane. And I have video to prove it! Luckily I was harnessed onto a man named Wade who knew what he was doing, and I had a couple of friends from the tour the last few weeks along with me for support. That definitely helped :)
Your perspective of time is a bit warped when you skydive. I jumped from 14,000 feet which gives you close to a minute of free fall before the parachute is opened. It definitely did not feel like a minute - probably closer to 15-20 seconds - and most of what I remember from that part was looking down, Wade lifting my head back (I guess the top of my head wasn't the best shot for the video) and my head being so cold that I wished I'd worn a hat.
I wasn't really aware of what was happening when Wade pulled the ripcord. I just noticed that, all of a sudden, we were positioned vertically instead of horizontally and a strap across my chest had magically transformed into the most effective (and painful) push-up bra ever. A second later Wade said: "Alright, it opened!" to which I replied: "Woo hoo! I'm going to live!!"
Enough said :) 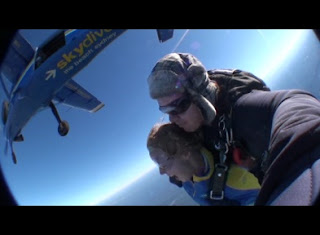 Right after jumping out... 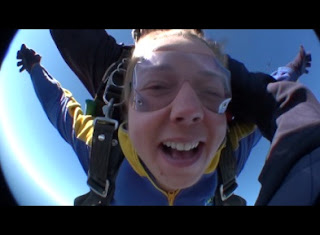 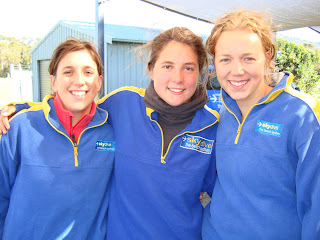